In this episode we will talk about the highest office of the State, the President of the Republic. The office is now held by President Sergio Mattarella.

Born in Sicily, Sergio Mattarella is the twelfth man elected for this office. Sergio Mattarella started his political career in the party called Christian Democracy, then in the Italian Popular party and in Democratic Party. Throughout the years he was ministry four times for different governments, before being elected as judge of the Constitutional court. His brother, Piersanti Mattarella, was killed by Cosa Nostra in 1980 because of his commitment  in fighting the mafia in Sicily during the second mafia war.

Today Mattarella resides as President in the Quirinal Palace, one of the three official residence for the President of the Republic. Sergio Mattarella was elected by the Italian Parliament after his predecessor President Giorgio Napolitano, who had served for nine years, the longest presidency in the history of the Italian Republic.

Mattarella was elected in 2015 with the support of the Democratic Party, New Centre-Right, civic choice and others minor parties. During his mandate Sergio Mattarella resolved two political crises and he nominated two Prime ministers, including the current Prime minister Giuseppe Conte.

Sergio Mattarella is very loved by the Italian people who see him as a father. His popularity comes from the impartiality he kept during the political crisis and from his candid way of speaking to people during the coronavirus pandemic. He has strong relationships with many European and extra-European leaders that allowed him to resolve occasional controversies very quickly.

After Jo Biden’s election as President of the United States, Mattarella sent him a very personal message, remembering the breakfast they had during an official visit in Washington. Also wishing to continue a proficient collaboration between the two countries.

In many pictures you should have noticed these guys. These are the president’s personal guards. They are typically called ‘Corazzieri’.

Being part of this elite regiment is an honour, but not everyone can become part of this èlite force. Candidates must have a clear personal and family morality, excellent discipline, and service history in the Army. From a physical point of view this position requires at least 190 cm in height. Before being the President personal guard they were the King’s guardsmen until the fall of the monarchy. The representative role of these soldiers is clear from the ancient uniforms and from the horse-riding training.

In June 2017, the first Corazziere of colour in the Italian history made his debut in occasion of Pope Francis’ visit to the Quirinale.

Pictures from Presidency of the Republic archive 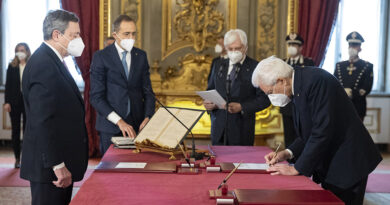 Italian PM Mario Draghi tries to save the country